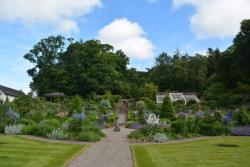 Drimbawn House in Tourmakeady, Co Mayo was built by Bishop Plunkett in the middle of the 19th century.

Over the years and under the tenure of several different owners, the garden, which was originally designed by Ninian Niven, declined. Some trees and structures however survived as a reminder of the Victorian era.

In 2001 the development of the gardens under the consultation of Garden Designer Daphne Levinge Shackleton commenced and is ongoing.

Some areas such as the walled flower and vegetable garden, orchard, rhododendron bank, woodland gardens, bog garden, arboretum etc. are completed while others are a work in progress.

Email me jobs from Danbywiske